“There are decades where nothing happens; and there are weeks where decades happen.”

This was a week where decades happened. The gravity of the COVID-19 outbreak cannot be overstated. I hope this post provides some first-person insights into our healthcare system and what the past couple of weeks have been like in Manhattan.

Stay home. Limit social contact – if not for yourself, then for your loved ones. Stay safe.

I work as an Operations Engineer at Oscar Health, a health insurance and tech company. I’m currently holed up in my apartment in Chinatown, Manhattan with my girlfriend, who works as an administrator at a major hospital in New York City.

There is a certain mystique around doctors and hospitals. I’d like to tear that down. Imagine all of the organizational inefficiencies, bureaucracy, and politics of your workplace. Then add in a massive dose of the Dunning-Kruger effect due to credentialism. That’s a hospital.1

This is not meant to denigrate the doctors, nurses, and other healthcare professionals working on the front lines. They need all the support they can get and are making heroic efforts right now. But that is to say that our system is fragile.

Even in a bad flu season, hospitals can become overwhelmed. In a pandemic, hospitals collapse. People will die en masse. Not only from COVID, but from inability to access emergency procedures due to the influx of COVID patients. The trolley problem has become our grim reality.

Hospitals – and our healthcare system as a whole – are not ready for this.

Some of our anecdotes are straight out of a South Park episode. As late as Thursday, March 12, the hospital where my girlfriend works held a 100-person town hall meeting about how they should limit mass meetings. That same day, they said they would begin to conduct interviews to see which hospital personnel could work from home.

Doctors we know have taken to social media to beg people to not come to the ER. They have been swamped for days with people with flu-like symptoms. At this point, you should not go to the hospital for anything that is not life-threatening.

Testing for this illness is a lost cause from a containment perspective. Because the COVID testing process has been so bungled by the government, for the past week or so NYC hospitals have been sending people with COVID symptoms home without being tested and asking them to self-quarantine.

The only reason to test now would be to further convince the general public of the severity of this situation.

At Oscar, when we heard that COVID-19 tests would soon be rolled out by Quest Diagnostics and others, we worked to configure our systems to process these claims. We were ready within hours of hearing the news. We still haven’t received a single COVID test claim for our 400,000+ members.

Within days, we stood up this website with a list of COVID resources, a quiz to self-diagnose, and a map of places where you can be tested.

The private sector is not the blocker. Though the impact may be small in the grander scheme of things, I’m proud to work at a company that is moving quickly and taking action in a time of need.

This past week, the city has felt like the opening scene in an apocalyptic movie. Longtime New Yorkers I have spoken with drew the comparison to the days after 9/11. This escalated very quickly.

January 24: We received an email at work saying that going forward, employees who traveled to China would need to self-quarantine for two weeks and have a doctor’s note saying they were asymptomatic before returning to work. Some grumbled that this policy “seemed racist”.

February 7: I went home to Chicago for the weekend. I made a joke to my family about the outsized amount of media coverage Coronavirus was getting. On the way back to New York, I grabbed a copy of The Economist at the airport. I didn’t think much of the cover. 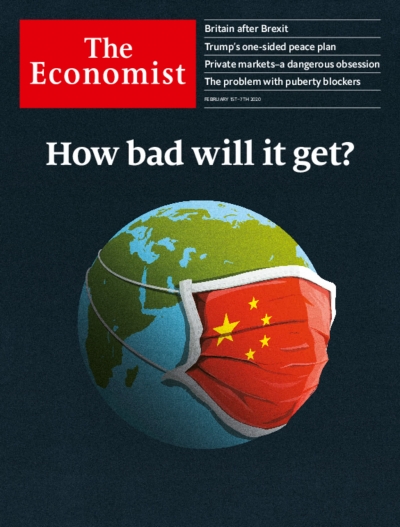 Mid-February: I started paying attention to some of the smart people I follow on Twitter who said this could be a big deal. I bought some food, water, and medical supplies as a cheap insurance policy. I felt like an idiot when the Amazon delivery driver showed up at my door with a cargo bike full of bottled water.

Week of March 2: Starting to get worried. This can’t be spreading that much, can it? But I still think I’ll head back to Chicago to see my family on March 14…things won’t escalate too quickly before then.

March 6: Drop everything at work to begin working on COVID-related initiatives.

March 7: Realize that I won’t be traveling anywhere anytime soon. In retrospect, I should have stayed in Chicago last month. But hindsight is 20/20. The thought didn’t even cross my mind at the time.

March 10: Have a serious conversation with my girlfriend about what we’ll do in the case of a quarantine. Manhattan is not a good place to be in a crisis. Too risky to fly home to Chicago; I could pick something up at the airport and transmit it to my parents. Ultimately decide to stay put. I have a good setup and emergency items here. And if shit really hits the fan, it’s better to be within walking distance of a hospital than to risk the unknown.

I feel like I’m in a war movie, in the tense scene showing the preparation for battle. The calm before the storm. We all know that the enemy is coming, that some of our friends will die. It’s only a matter of time.

March 12: Market crashes again. Office is closed for at least the next two weeks. I’m preparing for at least two months. People are stocking up on food and water. There is a line out the door at Trader Joe’s. The Target next door is curiously uncrowded. The sheeple don’t think.

March 13: First day of mandatory work from home for my office. Refreshing the Johns Hopkins map nonstop. NYC has 25% of the normal foot traffic you’d see. People are giving each other a wide berth in the street. Virtual happy hour.

March 14: Begin apartment workout regimen. Push-ups, pull-ups, kettlebells and jumping rope on the roof. Limiting myself to a max of one drink per day to keep the immune system strong. Strange to see a beautiful day juxtaposed with a quiet(ish) city. Talk to my family via FaceTime. My 97-year old grandfather says that he has never seen such chaos in his life. He lived through the Great Depression, World War II, and essentially all of 20th Century history. He’s unperturbed.

March 15: More than 50% of the people on the street in Chinatown are wearing face masks. R.E.M. stuck in my head.

The private sector has stepped up in a big way. All sports have been cancelled. Billions of dollars that were given up by the NBA, NCAA, etc. for the sake of public health. At this point, if you haven’t cancelled mass gatherings, you’re seen as tone-deaf at best and homicidal at worst.

Small businesses, who are likely worried about making rent payments on April 1, are stepping up to give what they can in a time of need. I’m touched by moments like this, where a restaurant will give out sandwiches to any kid who needs one happening all across the city.

Due to social pressure, schools across the country have been closed. After LA, Chicago, Philadelphia, and other major school districts closed, NYC public schools bowed to public pressure at the eleventh hour.

There’s a sense that we’re all in this together. Yesterday, I ran into a man who lives in my building. We had an honest conversation about everything going on and how we’re coping. It takes a quarantine to talk to your neighbors in NYC 😛.

Grants are being given out for Coronavirus-related work. It’s time to mobilize. In an age of post-modernist nihilism, we have a sense of purpose. This can be our finest hour.

This will go down in history as a before/after event, like World War II, the fall of the Berlin Wall, or 9/11. Before Coronavirus life was one way, afterwards, it will be completely different.2

Second and third-order effects of this pandemic:

This is something normal that has happened throughout the course of human history. Some good advice can be found here.

Keep in mind the principles of risk mitigation. A good rule of thumb is to be creative and take chances when you face a capped downside and an uncapped upside. This is not that time. We face an extremely capped upside (the world is what it was like a year ago) and an uncapped downside (millions die and we enter a prolonged economic recession). Now is the time for conservatism.

Now is the time for (in)action. Your grandparents were asked to storm beaches. Do your part and stay home.